The increasing sophistication of cyber-attacks is a matter of concern particularly when looking at some of the notorious attacks that have occurred during the past few years. Narrating a scenario fifteen years back involving a computer-crafted worm compromising nuclear plant operations would have sounded as a James Bond movie until Stuxnet was uncovered in 2010. Cyber-attacks that followed in subsequent years were no less sophisticated and worrying.  Interpol and Kaspersky Lab’s Global Research and Analysis Team  revealed the “Darkhotel” stealth attack in 2014 which involved a sophisticated cyber-espionage campaign targeting high profile corporate executives through “legitimately appearing” software.  More recently in 2017, the WannaCry ransomware attack became nearly a digital epidemic with more than 200,000 victims across 150 countries.

While the world witnessed the fastest malware spread with WannaCry in May of 2017, it took just one months for it to experience another wave of attack with NotPetya, a crypto-ransomware that is considered as the costliest known cyber-attack until date with an estimated global financial impact nearing the $10 billion figure.

Apart from the financial impact, what is baffling about WannaCry and NotPetya is the rapidity with which these malware have spread across the world infecting computer systems while revealing flaws in existing security defense mechanisms. This has been a major wakeup call, especially with regards to the impact on operations and the unprecedented situation of hackers claiming colossal amount of ransom to release encrypted data.

As for a more recent attack, Bloomberg business week magazine reported a ransomware attack hitting Finastra, a Fintech company working with 90% of the world’s biggest banks forcing the company to take its servers offline.

Different types of cyber-attacks are generally associated with different motivations. Some attackers have personal motivations in revealing system vulnerabilities while other attackers are financially motivated and are behind organized crimes. In other cases cyber-attacks are also military grade attacks between conflicting nations.

Scammers are actively exploiting emails as a means to reach large number of people in view of stealing corporate data and spreading ransomware. This is a rising global concern that is only becoming more alarming as attackers are theming their messages based on topics of general public interest to successfully get people clicking on malicious links. Another wave of such attacks has recently been observed recently during the outbreak of coronavirus with multiple emails related to fake news, disinformation and fraudulent fund raising attempts around the COVID-19.

All this to say that there is a lot of malicious activity going on in the cyber space and this is an invisible force the world is facing in this new age of cyber-attacks. As a security consulting company, we systematically have insights on cyber security incidents. Today, what we are seeing is a multiplication in phishing and whaling attempts targeted towards local companies. Ransomware attacks encrypting critical business systems are more and more common.

The risk is real.

It is a myth to believe that an organisation is secure if it has not been attacked. The question is rather when an attack may happen if it has not yet occurred. On the international level, companies like Yahoo, Twitter, Maersk and several others having international exposure and worldwide reputation have already been victim of some kind of cyber-attack. Our observations of local incidents with ransomware, automated intrusion attempts, phishing and fraudulent emails show that the risks are as real in Mauritius. In 2016, a financial fraud of 115 million rupees was committed at the detriment of a company operating in the hospitality sector. Other cyber-attacks leading to financial losses were noted particularly in 2018 for a reported amount of 490 million rupees in the banking sector and in 2019 against an offshore company for a reported amount of 125 million rupees.

Certain cyber-attacks lead to financial and reputation loss of a business while others can put a whole nation’s industry at risk. The year 2019 was a difficult year for Mauritius as a breach of sensitive information led to the national offshore sector being under the world’s projector. The breach named as “Mauritius Leaks” was based on 200,000 leaked files comprising of documents, emails, contracts, official voice-recordings that revealed sensitive corporate data including fiscal and strategic advice of clients to the International Consortium of Investigative Journalists.

This leads to raising questions whether organisations are sufficiently protected or indirectly inviting trouble by simply being honey pots of exploitable weaknesses.  A recent Forrester report stated that as much as 80% of data breaches revealed presence of inadequately configured firewalls. Firewalls are one of the many essential security defense mechanisms and the risk is high if multiple such controls are not as effective as we would expect. Having said that, ineffective controls and equipment are not the only origin of data breaches. Human error is also a risk factor, which facilitates phishing and related data, breaches. This is the very reason user security awareness is crucial today in the empowerment of people so that they become the human firewall standing against those cyber threats that probe people to commit the irreversible action.

Organizations are unable to keep pace with the ever-evolving threat landscape given the rapid pace with which cyber criminals are developing attacks.   The good news is that a lot can be done to improve security and mitigate risks related to cyber-attacks. However, there is no one-size-fit-all formula, rather a suitably crafted security improvement roadmap for the organisation commensurate to its unique risks, business and operational aspects can be strategically a timely move. This is where Rogers Capital is actively accompanying organisations in their security improvement plan through its #CyberSecurityAdvisory and #BeAwareBeSecure campaigns.

By looking at Cyber Security and risk management through a holistic approach, we are assisting organisations in a variety of ways. From Cyber Security audits to Cyber Security awareness, we provide guidance all throughout the security journey of the enterprise.

We are putting our expertise in security solutions design and implementation to the benefit of the community. Our high caliber Cyber Security professionals in Network Security, Information Security Management, Digital Forensics, Ethical Hacking and Data Protection are already assisting companies in improving their cyber security posture. We aim at using cutting-edge technologies to assess cyber security risks and allow organizations to proactively defend themselves against potential threats.

We believe developing all the way from strategy to implementation, strengthening existing capabilities and addressing any crucial gaps in the fast-changing risky environment of cyber-attacks can help mitigate threats and reduce potential business disruptions.

Talk to us today to schedule a free 30-minute discovery call.

You can contact our cyber security advisory team for more details. 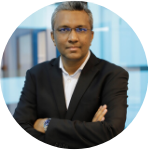 Female leadership in 2022: how we have progressed and are changing the landscape

How digitalisation is maximising efficiency and transforming the world of work